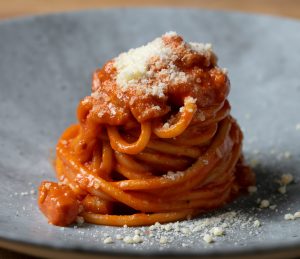 Amatriciana is a type of pasta dish that originates from the town of Amatrice in central Italy. The exact origins are a bit of a mystery. Some say that the dish was created by Roman soldiers who were stationed in Amatrice. Others believe that it was created by peasants who needed to make use of whatever ingredients they had on hand. Regardless of its exact origins, amatriciana is now a staple of Italian cuisine.

It is traditionally made with a specific type of pasta called bucatini, which are long, hollow strands of pasta. The sauce is typically made with tomatoes, pancetta (a type of Italian bacon), and pecorino cheese. Sometimes onions or garlic are added as well. However, at Bello by Sandro Nardone, ours is made with bigoli pasta (similar to bucatini) and pork jowl rather than pancetta.

Amatriciana is often served as a first course, although it can also be enjoyed as a main dish. It is often served with a sprinkling of Parmesan cheese on top. We encourage our guests to order it and share it at the table so everyone can enjoy it.

Amatrice is a town located in the central Italian region of Lazio. It is situated in the mountains, about 100 km from Rome. Amatrice is known for its scenic beauty, as well as its cuisine. The town is located within the Gran Sasso e Monti della Laga National Park, the third-largest national park in Italy, situated among the Appenine mountains. In 2016, the town was all but destroyed in a 6.0 earthquake. While recovery has been slow, the region is still open to visitors seeking to enjoy its favorite pasta. Most travel in for the day, as hotels were lost in the earthquake and accomodations are scarce.

If you’re ever in Italy and have the chance to try amatriciana, don’t miss out! It’s truly delicious. Until then, join us at Bello by Sandro Nardone and explore ours, one of the most popular dishes on our menu.